Holds the title of First Lawn Tennis Club in the World. 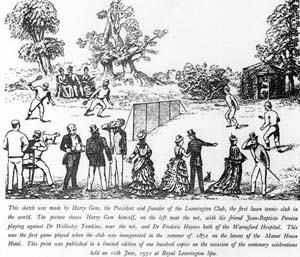 The Club is officially recognised as the world’s first lawn tennis club, founded in 1872 by Major Harry Gem some three years before the sport was introduced to Wimbledon.

He had recently moved from Birmingham to Leamington, and was a keen member of the Real Tennis Club in Bedford Street. Leamington in those days was something of a sportsperson’s paradise with cricket clubs, polo fields, golf courses and many other sports facilities for the purposes of amusing the large population of gentry in the town.

Looking to make a version of Real Tennis that would make it easier and cheaper for more people to play the sport he so much enjoyed, he developed a garden version originally. Whether gardens were too small, whether playing lawn tennis caused too much damage to them, or whether through popular demand new premises became necessary, history shows that in 1872, along with three of his close friends, Arthur Wellesley Tomkins, Frederick Haynes, and Augusto Perera, Major Gem opened the Leamington Lawn Tennis Club in Avenue Road on land adjoining what was then the Manor House Hotel.

Tennis grew in popularity; in 1875 he published a set of laws of the game as it was played in Leamington, the competitive side of the game began to develop, matches were organised against other clubs, and tournaments also became popular. The first tournament was organised in 1876, and in 1881 the first Open, named “The Annual Leamington Lawn Tennis Tournament” was played, and continued to be played until the outbreak of the Second World War.
Because of the popularity of this event, it was staged in the Jephson Gardens, and as the tournament became more and more competitive, more attention was paid to the state of the courts. In 1889 the Willes Road end of the Jephson Gardens was levelled as a consequence.

By then Wimbledon was organising its own tournament, and generally the Leamington tournament was played in mid-July following Wimbledon.

Not surprisingly many Wimbledon winners went on to claim the Leamington championship, but Leamington produced many fine players, the best undoubtedly the brothers William Charles Renshaw and James Ernest Renshaw. William won the Wimbledon Singles final 7 times between 1881 and 1889, beating his brother twice in the final, and James won it in 1888. Between 1884 and 1888 playing together they won the Wimbledon Men’s Doubles title 4 times. A plaque identifies the house on the corner of Holly Walk and Willes Road where they were born.

The club is delighted that Scott H Tomkins, the great-grandson of one of the founders, has maintained the link with this heritage by presenting a trophy for an annual mixed doubles tournament. This is known as the Arthur Wellesley Tomkins Trophy.